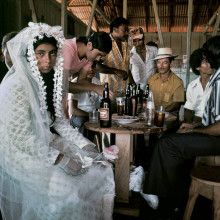 Rui Faquini was born in 1943 in the state of Goiás in a time the access to the Brazilian hinterlands was rare and difficult. In the early 60's he watched and participated in the construction of Brasilia.
During the 60's and 70's he was able to live in several countries outside Brazil. It was this experience that opened his mind to the wide range of the world's cultures. In fact, he started his career as a professional photographer while living in Iran and Japan, then he did a large amount of documentary work in the former Yugoslavia and participated in several workshops at top studios in Switzerland, England and Italy.

When he returned to Brazil, got more and more involved in documenting Brazilian culture and scenery, specializing in the center (cerrados), western (pantanal) and northern (amazônia) regions. He has a studio in Brasilia where he works for advertising and editorial clients. He also has an extensive image bank from the last 30 years of work.