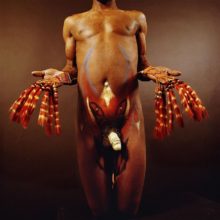 Rotimi Fani-Kayode (1955–1989) was born in Lagos, Nigeria to a prominent Yoruba family who left Africa as refugees in 1966 and moved the UK. He later studied at Georgetown University and the Pratt Institute in the USA, before settling permanently in London in 1983, where he lived and worked until his early death from a short and unexpected illness on December 21, 1989. A prominent figure in the Black British art scene, Fani-Kayode was the founding member and first chairman of Autograph ABP (Association of Black Photographers) in 1988. His photographs have been exhibited internationally since 1985, with numerous recent solo exhibitions in London, Boston, New York, and Cape Town. In 2003, his work featured in the African Pavilion at the 50th Venice Biennale, Italy and in 2011 in ARS 11 at Kiasma-Museum of Contemporary Art in Helsinki, Finland. Fani-Kayode’s work is represented in the collections of numerous institutions and private collectors including the Victoria & Albert Museum, Walther Family Foundation, Harvard University’s Hutchins Center, Kiasma-Museum of Contemporary Art and the collection of Yinka Shonibare MBE, amongst others. Many of his photographs were created in collaboration with his late partner Alex Hirst and are collected in the posthumous 1996 publication Rotimi Fani-Kayode and Alex Hirst: Photographs. His work is represented by Autograph ABP, London.