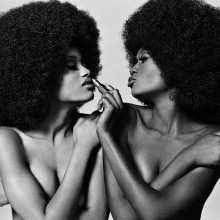 In 1990, Roger Erickson began his career as a fine art photographer in London. He has since become an internationally recognized music, fashion and celebrity photographer. His first commissioned assignment was photographing Neil Young with Crazy Horse for Select Magazine. Known for his warm and engaging style, his work has appeared on numerous magazine covers, album packaging, and advertising campaigns.

Look What The Cast Dragged In