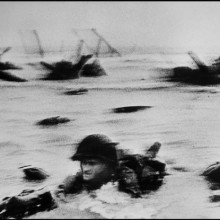 Robert Capa (October 22, 1913 – May 25, 1954) was a Hungarian war photographer and photojournalist who covered five different wars: the Spanish Civil War, the Second Sino-Japanese War, World War II across Europe, the 1948 Arab-Israeli War, and the First Indochina War. He documented the course of World War II in London, North Africa, Italy, the Battle of Normandy on Omaha Beach and the liberation of Paris. But the 'greatest war photographer' hated war. Born Andre Friedmann to Jewish parents in Budapest in 1913, he studied political science at the Deutsche Hochschule für Politik in Berlin. Driven out of the country by the threat of a Nazi regime, he settled in Paris in 1933. He was represented by Alliance Photo and met the journalist and photographer Gerda Taro. Together, they invented the 'famous' American photographer Robert Capa and began to sell his prints under that name. He met Pablo Picasso and Ernest Hemingway, and formed friendships with fellow photographers David 'Chim' Seymour and Henri Cartier-Bresson.