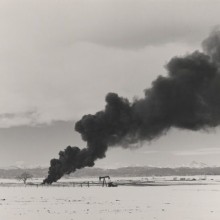 Robert Adams (born May 8, 1937) is an American photographer who has focused on the changing landscape of the American West. His work first came to prominence in the mid-1970s through the book The New West (1974) and the exhibition New Topographics: Photographs of a Man-Altered Landscape(1975). He was a John Simon Guggenheim Memorial Foundation Fellow in photography in 1973 and 1980, and he received the MacArthur Foundation's MacArthur Fellowship in 1994. In 2009, he received the Hasselblad Award for his achievements in photography.