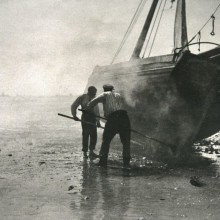 Pierre Dubreuil (1872 - 1944) was a French photographer, born in Lille, who spent his career in France and Belgium.

In 1888 he entered the Jesuit College of St. Joseph Lille and began practicing photography with a half-plate darkroom at the age of sixteen. After three years in the Dragons in Saint-Omer, he collaborated with photographer Louis-Jean Delton, horse specialist subjects.

In 1891, Pierre Dubreuil became a member of the Photographic Society of Lille. There he met Robert Pauli who initiate certain printing techniques such as coal and platinum. From 1896 to 1903, its reputation in the world of photography pictorialist increases. In France, the Paris Club Picture accept in 1896 five of his races.

In 1900, the Linked Ring Brotherhood of London admits among its members. Dubreuil stay in London in 1901 to study the landscape. He left the prestigious association in 1908. Settling in 1902 for two years in Paris, Dubreuil focuses on the theme of the city and photograph the monuments of the capital. It uses the 1904 process inks fat Rawlins, who became his preferred method and will use until the 1930s. He sent to Alfred Stieglitz in 1910 twelve events.None will be published in Camera Work, but six of them will be presented to the blind, the International Exhibition at Albright Gallery in Buffalo.

During the First World War, he enlisted as an ambulance driver and his house was looted with much of his photographic equipment. Dubreuil resume his career as a photographer in 1923, in Belgium, where he became a member of the Belgian Association of photography, created in 1874.

He published several texts on technical and aesthetic photographic and participated in many exhibitions. In 1935, the Royal Photographic Society of London held a retrospective comprising one hundred and fifty works.