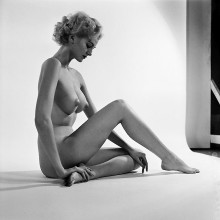 Peter Basch (1921 - 2004) was an American photographer. Basch was born in Berlin, Germany, the only child of Felix Basch and Grete Basch-Freund, both prominent theater and film personalities of the German-speaking world.

In 1933 the family came to New York due to fears of rising anti-Jewish sentiment and laws in Germany. The family had US citizenship because Felix's father, Arthur Basch, was a wine trader who lived in San Francisco. After moving back to Germany, Arthur Basch kept his American citizenship, and passed it to his children and, thence, to his grandchildren.

When the Basch family arrived in New York in 1933, they opened a restaurant on Central Park South in the Navarro Hotel. The restaurant, Gretel's Viennese, became a hangout for the Austrian expatriate community. Peter Basch had his first job there as a waiter. While in New York, Basch attended the De Witt Clinton High School. The family moved to Los Angeles to assist in Basch's father's career, during which time Basch went to school in England. Upon returning to the United States, Basch joined the Army. He was mobilized in the US Army Air Forces' First Motion Picture Unit, where he worked as a script boy.

After the war, he started attending UCLA, but his mother asked him to join her back in New York. His parents had decided that Basch should be a photographer, and they obtained a photography studio for their son.

For over twenty years, Peter Basch's had a successful career as a magazine photographer. He was known for his images of celebrities, artists, dancers, actors, starlets, and glamour-girls in America and Europe. His photos appeared in many major magazines such as Life, Look and Playboy.