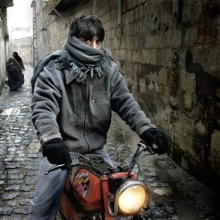 Born in Bakırköy, Istanbul on 26 January 1959, Nuri Bilge Ceylan spent his childhood in Yenice, his father's hometown in the North Aegean province of Çanakkale. His father, an agricultural engineer, had been working at the Agricultural Research Institute in Yeşilköy, Istanbul. But when, with idealistic aspirations, he requested a transfer to Çanakkale, the family uprooted and moved to Yenice. Nuri Bilge was just two at the time.

For Nuri Bilge and his older sister Emine the move meant a childhood of freedom roaming the Yenice countryside. It was only to last, however, until his sister finished middle school. Since there was no high school in Yenice in those years, the family was forced to return to Istanbul in 1969, as a result of which Nuri Bilge spent the fifth grade of primary school, as well as his middle and high school years at state schools in Bakırköy. All the same, he generally chose to go back to Yenice for at least some of the summer holidays.

In 1976, having graduated from high school, he began studying chemical engineering at Istanbul Technical University. These, however, were turbulent times; and lectures were constantly interrupted by boycotts, clashes and political polarization. His course was based at the university's Maçka campus, where incidents were at their most intense, and two years slipped by with little opportunity for study: circumstances simply didn't allow. In 1978, he re-sat the university entrance exams and switched courses to electrical engineering at Boğaziçi University, where there was relatively little trouble at the time.

His interest in the art of photography, kindled during his time at high school, blossomed at the Boğaziçi University photography club, where he also took passport-style photos to earn some pocket money. As well as photography, he also became involved with the mountaineering and chess clubs. The university's extensive library and music archive played a significant role in fuelling his passion for the visual arts and classical music in particular. Meanwhile, the elective film studies course he took with Üstün Barışta and the film club's special screenings did much to reinforce his love of cinema, which had taken root earlier during showings at the Cinémathèque in Istanbul's Taksim. These were the years before DVD and video when films had to be watched at the cinema.