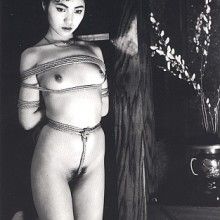 Nobuyoshi Araki (born May 25, 1940) is a Japanese photographer and contemporary artist. Documenting Tokyo he captures its obscene energy and inhuman emptiness in the sex clubs and entertainment district, crowded streets, buildings and skies. His work is infused with an intense sexuality. He has been widely accused by feminist groups of being a misogynist because of the content of many of his photographs. Araki is probably best known for his photos documenting the Japanese sex industry, focusing on the Kabukicho district of Shinjuku in Tokyo in the 1980s. These were later published in "Tokyo Lucky Hole." Having published over 350 books (and still more every year) Araki is considered one of the most prolific artists alive or dead in Japan and around the world. Some of his most popular photography books are "Sentimental Journey", "Tokyo Lucky Hole" and "Shino". He has also photographed for many pornographic magazines such as Playboy, DejA-Vu, and Erotic Housewives. He has been arrested several times for breaking Japanese obscenity laws, and the curator of a museum was once arrested for displaying Araki's work. He has never faced jail time or serious fines, however.