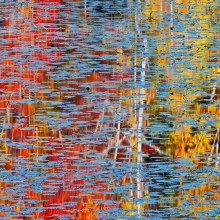 Mike Grandmaison is a leading Canadian nature photographer based in Winnipeg, Manitoba. Following a 20-year career in the biological sciences, Mike launched a new career as a full time professional photographer in 1996. He photographs for a broad range of corporate and editorial clients, in fields ranging from agriculture to architecture and from forest to factory.

His passion for photography, particularly his ability to capture the intimate details of the natural world, has won him numerous commissions from clients across Canada, the U.S.A. and Europe. His academic knowledge and working experience in the natural sciences, coupled with his passion for photography, technical skills and an artist's eye, make him a sought after photographer for outdoor work. Uncompromising quality of craftsmanship, together with a signature style, distinguish Mike in this highly competitive field. Mike’s images have been widely published in leading magazines and his stunning nature photographs have been employed by some of North America’s top corporations including National Geographic, Canadian Geographic, Audubon, Sierra Club, Wyman Publishing, Loblaws, the Canadian Wheat Board, Smith Carter Architects, Geo, Canada Post, Canadian Gardening and the Government of Canada to name a few. His images have appeared in 6 Canada Post stamp projects to date and another one is due out soon.

Mike's images have been published around the world in hundreds of books, magazines and calendars. He has authored 10 books and his latest book ‘Mike Grandmaison’s Prairie and Beyond’ (2012) - published by Turnstone Press of Winnipeg - was recently nominated for two Manitoba book awards. It also received a '2012 PIA Certificate of Merit' in the category 'Art Books' in The Premier Print Award Competition recognizing the highest quality printed pieces in various categories from around the world. His other books include Muskoka (2010), Georgian Bay (2008), The Canadian Rockies (2007) and Canada (2005). Mike is currently working on an Ontario book for 2015 and a brand new Canada book for 2017, in addition to a number of book projects also in the works.

Mike has taught photography for years, conducting nature-focused workshops as well as presenting lectures to various organizations around the country. Since 2007, Mike has written and illustrated a regular feature for ‘Outdoor Photography Canada’ magazine called ‘Discovering Canada’, in addition to publishing various photo/text packages for numerous other magazines.

Recently, Mike established ‘The Canadian Gallery’, an online gallery which features his fine art photography. In the fall of 2012, The Manitoba Arts Network commissioned Mike to produce two exhibitions of large-scale photographs based on his latest book 'Mike Grandmaison's Prairie and Beyond'. This print exhibition is currently traveling throughout Manitoba communities for a two-year period until December 2014.

To see more of Mike’s work, check out his websites and follow Mike via his blog.