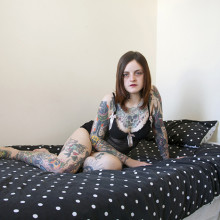 Michelle Sank was born in South Africa and currently resides in the UK. Her photographs have been exhibited and published extensively in England, Europe, Australia and Mexico, South Africa and the U.S.A. Her imagery is held in the permanent collections of Allan Servais, Brussells, Museum of Fine Arts, Houston, Texas, and Open Eye Gallery Archive, Liverpool .
She has undertaken numerous commissions for prominent galleries and magazines in Europe and the USA and her work has won awards in many prestigious competitions.
Sank has three published books, The Water's Edge: Women on the Waterfront (Published by Liverpool University Press, 2007) - a study of women who worked and still work on Liverpool's Docks, Becoming (Published by Belfast Exposed Photography and Ffotogallery, 2006) - a major monograph featuring her portraits taken over five years, and The Submerged published by Schilt Publishing, 2011.
A new body of work “Insula” created during a 6 month residence in Jersey, Channel Islands will be published in 2014.