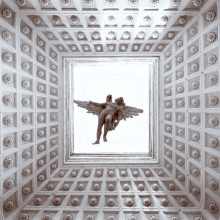 Michele Alassio was born in Venice on August 23rd, 1956. As a photographer, he has undertaken projects for Bell'Italia, F.M.R., Marco Polo, Atlante, Vogue Antiques, among others. He has also produced reproductions of works of art for the Sovrintendenza del Veneto, the Museo Armeno, Archeological Museum of Aquileia, as well as public and private institutions, dealers, and artists. He also produced advertisements for Vogue Italia, Uomo Vogue, Elle, Lui, Vanity Fair and Vogue Gioielli. He has worked on advertising campaigns for Alberta Ferretti, Rene Caovilla, Ermenegildo Zegna, Lorenzo Rubelli, Al Duca D'Aosta, Giorgio Armani, Ungaro, De Beers, Sent, Domus, and others. He was also involved in film and cinematography for companies such as BRW and Diavivafilm.
His first exhibition, curated by Zìva Kraus of Ikona Photo Gallery, took place in August, 1985, and was entitled "Fotografia in Venezia - Paolo Monti & Michele Alassio." In 1987, on the invitation of Lanfranco Colombo, director of the Milanese gallery "Il Diaframma," Alassio's work was exhibited in the International Photography Salon of Milan. In 1995, the artist began printing limited editions of his works, both with subjects derived from earlier exhibitions as well as new subject matter.
The series was shown at various galleries, and was well received not only by the viewers, but also by the international collectors who bought several hundred prints from 1997 onwards. For this body of work, Alassio used a special selective 'virage' process on mounted baryt paper.
This series was further exhibited in September of 2000 at the Bac Art Studio of Venice. During this time, roughly spanning from 1995 to 2002, Alassio planned and completed his famed "Sacks," exhibition which consisted of 13 images inspired by the cases examined and documented by the famous American neurologist Oliver Sacks. These were presented in a preview exhibition at the Bugno Art Gallery in Venice in December 2002. In 2003, Alassio completed another body of work, entitled "Next Stop." These photographs were taken at the various pavilions in the 2003 Venice Biennale, and also consisted of 13 images. Both exhibitions were presented again at the Cortina D'Ampezzo at the Sovilla Bookshop in the summer and winter of 2004.
During the same year and into 2005, Alassio accepted a commission from the heralded architect Emilio Ambasz & Associates of New York for a multimedia project depicting the "Casa de Retiro Espiritual." This architectural gem is located in an immense estate in Andalusia, Spain. The project, once completed, consisted of a volume of photographs accompanied by a video made using a radio-controlled model helicopter. The project was accompanied by a catalogue, published in Italy, and distributed throughout the world. In November 2005, the Museum of Modern Art of New York exhibited the photographs and aerial video from the project. The exhibition was originally intended to end at the beginning of March 2006, but was extended due to popular demand. In May 2006, a selection from this exhibition was shown at the Museum of the Permanent One, in Milan. In July 2007, Alassio's new body of work entitled "Venice-Thirteen New Images" was exhibited at the Daniele Luchetta Gallery in Venice.
From October 23 to December 20, 2008, the Barry Friedman Gallery in NY presented a selection of the series "Sacks", "Next Stop" and "Venice".

In the month of April 2011, Alassio's new body of work, entitled "J.L.B." ( Jorge Luis Borges) was exhibited in one preview of 13 of the 21 photography at the Civic Museum of Pistoia, Italy, in collaboration by the Barry Friedman Gallery and the Museum of the Paper of Pescia. After this first preview, the show was exhibited also in Venice in the month of May ( Bugno Art Gallery), St. Petersburg (ROS PHOTO) in June-September and New York (Barry Friedman Gallery.) in October.

A new edition of the catalogue of the work, whit two new essays by Maria Kodama and Paul Leclerc (President Emeritus of the New York Public Library) is scheduled for 2013.

The first exibithion of eight photographyes by the new body of work, entitles “ Dreams & Nightmares” is scheduled in the month of novembre 2013, during the Salon: Art + Design, in New York.