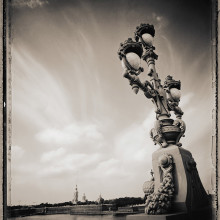 Michael has spent his years capturing the still image of people, cultures, and
landscapes from around the world, to around the block, with a very unique and
distinctive style. A native Californian, Michael resides in Los Angeles, though equally at
home trudging through Redwood forests, riding the rails deep into Siberia, or navigating
the chaotic streets of Tokyo. He photographs with many types of cameras and film,
from a clunky toy camera to a fully digital model, using each as a tool for a specific use.
Yes, he’s that guy at the airport having his bags rifled through by confused security
personnel, unable to comprehend as to why anyone would be carrying so much stuff.
Michaels fine art imagery has garnered recognition from the International
Photography Awards, the Prix de la Photographie in Paris, Photographers Forum, and
Critical Mass; been published in Black & White, Adore Noir, Fraction, and Diffusion
Magazine, as well as numerous high profile photo blogs, and exhibits work
internationally. He has also been an active Board Member for the L.A. chapter of the
American Photographic Artists since 2006.
The wisest words Michael ever gleaned from his father were to do what you love as
your life’s work. Truer words have never been spoken.