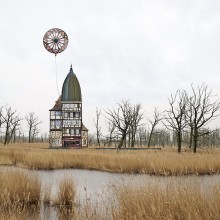 I am always amazed at how architectural details can evoke certain associations and feelings. This is how a latticed window conveys coziness; one might even say it is soulful. Framework is soothing, sometimes touching. Antennas have something sinister about them. They point to something outside the picture. Concrete is cold and foreign – but maybe interesting for just that reason.

I began with the series „Houses“ in January 2015. Within a few weeks, seven complex images evolved. More are to follow. All the images used have been photographed by me. Many were taken during trips in northeastern Germany. My last trip took me to the Ruhr region where there are abandoned steel mills and heaps of coal. I find that to be very exciting. The houses in the „Ostheim“ image are located atop these old heaps of coal. For the photo „Malakoff“ I used a mining tower (“Malakoff Tower”) and the cathedral in the northern German city of Greifswald. I love having
elements that cause many different associations to collide with one another. I was especially pleased when I was able to use my grandmother‘s old tea warmer in the photo „Expedition to the East Pole“.

The composition of the individual elements correlates to a logic, as if in a dream. Basically, dreams are collages. In order for my work to function properly, I also have to consider design rules. Thus, the relationship between order/disorder and homogeneity/diversity must agree. A building has to first be stable and credible before I can add some “disorder”, to let it fly for example. One such disorder refers to another, only hinting at reality. I weave, so to speak, spiritual realities into everyday things.