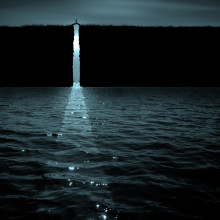 Marc Ward is an artist that makes images, not a photographer that takes pictures. The photographic stories and visions he creates use photography as the base... as a beginning point. From there, certain parts of the photographic image are removed and combined with other selected images to create the final work. Many of the images begin as an examination of previously shot items and locations that conjure up a new story. Sifting through an extensive library of old and new images, Marc uses vision and inspiration to combine previously shot images or goes in search of new material to combine with existing imagery. Marc Ward received his degree in Studio Arts form Maryville College in East Tennessee in 1976. A native Floridian, Marc brought his love of Florida’s water and big skies to the lush hills and water surrounding the Great Smoky Mountains. Living on one of the vast TVA lakes of Tennessee, the artist finds a never ending palette of colors, lines, and form to inspire him and to incorporate in his images. Marc is an award-winning photographer who’s work has been exhibited and collected worldwide. His most recent accolade is the “Merit of Excellence” in the 6th Annual Photography Master’s Cup International Color Awards. 2013 will also see the publication, by European publisher, Ilex Press of “Surreal Photography” that has Marc as a instructional contributor.

“...there was a time when I thought I needed be a landscape photographer. I was good at it... but my heart questioned what I was doing. What was I creating? Was I being the artist or the technician that tripped the shutter? This fabulous and sublime landscape was before me, but what was I creating other than the framing? I had to follow the voice that told me to truly make my own images.”