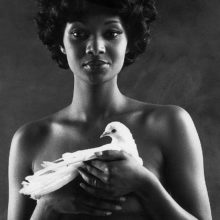 Marcel Giró was born in Badalona (Spain) on October 20th, 1913, son of an industrialist in the textile industry. He was the second of six children.

He studied at the National School of Badalona and later in the Industrial School of Terrassa, while working at the family factory.
Since his youth he was fond of mountain trekking and photography.

At the beginning of the Spanish Civil War he enlisted as a volunteer to the Pirenaico Regiment, depending on the Generalitat of Catalonia. In 1937, disappointed by the constant fighting between the different factions fighting against Franco, he decided to exile.
He walked through the Pyrenees from Berga to France where he spent nearly two years doing all kinds of jobs. Finally in 1940 he was able to travel to Colombia with two Catalan companions, where they set up a small textile business.

He married Palmira Puig, and they moved to Brazil, where they settled.

He exhibited his works all over Brazil and around the world. One of his photos, Luz e força, was selected for the exhibition Photography in the Fine Arts (New York, 1968) and is part of the collection of the Metropolitan Museum in New York. Currently there are works of Giró at the Art Museum of Sao Paulo (MASP), the MoMA in New York and in numerous private collections around the world.

Giró was also one of the pioneers of advertising photography in Brazil. In his studio worked young assistants that later become world-renowned as great photographers like JR Duran and Marcio Scavone.

After the death of his wife in 1978, he left professional photography and artistic photography. He sold the studio and returned to Catalonia.

During the 80's and 90's, he traveled with his partner Paquita Raigal and began to paint with a very close criteria to his Photography works of the 50s.