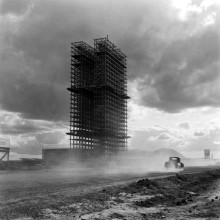 Marcel Gautherot (1910 - 1996) was a French-Brazilian photographer. Initially studied architecture, subsequently dedicating himself to photography. He came to Brazil in 1940, his interest in the country awakened by reading the novel Jubiabá, by Jorge Amado (1912 - 2001). After a brief journey around the Amazon, he settled in Rio de Janeiro. He executed photographic documentation projects for the recently created Serviço do Patrimônio Histórico e Artístico Nacional - Sphan [National Artistic and Historical Heritage Service]. He made contact with Brazilian intellectuals and architects, with whom he frequently worked, producing documentary series about the new Brazilian architecture. During the 1940s, he travelled along the São Francisco River, recording human types and the popular and religious festivals with an almost anthropological eye. With the photographer Pierre Verger (1902 - 1996), whom he met in Paris, he realised long journeys around the country, documenting colonial and modern architecture among other things. Throughout his career, he contributed to specialist Brazilian and European magazines, with most of his output in black and white. He also began to use colour film from the 1970s onwards. During this period, his work was mainly directed towards books published inside and outside Brazil. Among other books, he is the author of Pernambuco/Recife/Olinda, 1970, Congonhas do Campo, 1973, and Bahia, Rio São Francisco, Recôncavo e Salvador, 1995. In 1999, the photographer's collection of 25,000 images was acquired by the Instituto Moreira Salles - IMS [Moreira Salles Institute], in Rio de Janeiro.