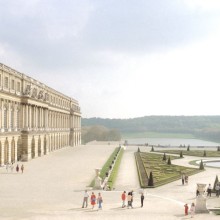 Luigi Ghirri (1943 - 1992) was an Italian artist and photographer who gained a far-reaching reputation as a pioneer and master of contemporary photography, with particular reference to its relationship between fiction and reality.

His realistic use of colour, the normality of his shots and subjects in comparison with formalistic or evocative photography and his capacity for insight allowed his work to play a fundamental role in the development of contemporary photography, both in Italy and elsewhere.

In his pictures we may observe the greatness of simple things and of certain details and atmospheres, allowing the landscape of Italy to be seen free from dated rhetoric. He is regarded as the leader of a movement even though he never founded movements or groups by a generation of photographers who, especially with regard to landscape, have been heavily influenced by him and a few other masters such as Mario Cresci and, before him, Paolo Monti.

In the early 1980s, he was the driving force behind a project entitled ‘Viaggio in Italia’ (Italian Journey), which was officially launched in 1984, with the participation of about twenty of the most innovative photographers of the period.

His most important works include Atlante (Atlas, 1973), Kodachrome (1978) and Esplorazioni lungo la via Emilia (Explorations along the Via Emilia, 1986).

Works by Ghirri, who is known and admired outside Italy as well, are present in important public and private collections, and, in recent years, have been shown in numerous retrospective exhibitions that investigate many aspects of his work some of them hitherto unknown bringing it to the attention of the younger generations.