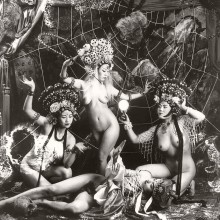 Liu Zeng was born in Wuqiang County, Hubei Province, China in 1969 and graduated from the Beijing Technology Institute in 1991. From 1991 to 1997, Zheng worked as a photojournalist at one of China’s most prominent newspapers. As he traveled throughout China from 1994 to 2001 for his series The Chinese, Zheng documented a society struggling with the contradictions between traditional culture and modernization and presented a broad cross-section of society including the wealthy; the poor; transsexuals; coal miners; opera performers; and museum wax figures. In The Chinese, Zheng photographed archetypical Chinese in contemporary incarnations and often surprising situations; staged tableaux exist alongside documentary images. According to the photographer, the self-imposed project was grueling and disheartening. After The Chinese he created more fictive figural representations, as evidenced by the series Dream Shock. Again both staged and spontaneous images coexist but this time the work, mainly nude portraits, explores the dream of what China could be and the shock of what it has become.
His photographs are held in collections including the Museum of Contemporary Art, Los Angeles; the Museum of Fine Arts Houston; and the San Francisco Museum of Modern Art.