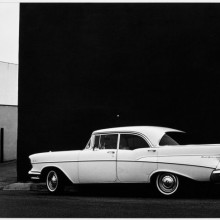 Lewis Baltz is a visual artist and well known photographer who became an important figure in the New Topographic movement of the late 1970s.

Presented together in the exhibition 'New Topographics: Photographs of a Man-altered Landscape' in 1975 (Rochester, NY), this group of young photographers brought a shift in landscape photography in showing the images of a world far removed from an heroic vision of America. This move was also illustrated by the subject matter of urban and suburban realities under change, as well as the photographers' commitment to a critical and ironic eye of contemporary American society. Thirty years after its opening, this exhibition still remains one with the strongest impact on landscape photography world-wide in its attempt to define both objectivity and the role of the artist in photographic creation. Lewis Baltz' contribution to the show consisted of photographs of an industrial warehouse complex in Southern California, in which the images of blank concrete walls and prefabricated buildings offer a critical position toward the claustrophobia of urban life. Often displayed in a grid format, it is important to Lewis Baltz that these pictures are seen collectively as a group or series, as for him one image should not be taken as more true or significant than another. Through his original approach, Lewis Baltz most clearly embodies the essence of the movement’s critical depiction of the American landscape. This, according to some authors, makes him more closely aligned with conceptual art than with traditional photography.