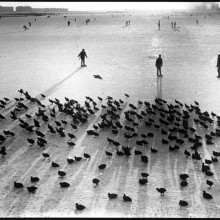 Leonard Freed (1929 - 2006) was a documentary photojournalist and longtime Magnum member.

Freed took trips to Europe and North Africa in the early 50s and thought he wanted to become a painter. He studied in Alexei Brodovitch’s design laboratory. Eventually Freed was intrigued by photography and how it could tell stories and explore life. Edward Steichen, then Director of Photography at the Museum of Modern Art learned of Freed’s work and told him that he was one of the three best young photographers he had seen. Steichen advised Freed to remain an amateur and bought three of Freed’s photos for the Museum.

In the early 60s Freed was living in the Netherlands when the photographs of the Civil Rights Movement in European newspapers compelled him to return to the United States. Freed was struck at what he saw as images of blacks in America that were often in the form of caricature. Freed set to create a body of work that refuted those caricatures and emphasized the individuality of his subjects. His subtle and thoughtful images comment on the unfairness of enforced segregation and provide context for some of the meaningful events that took place in America in the 1950s and 60s. Freed became famous with his involvement with the Civil Rights Movement as he offered photos of Harlem Streets, early images of Martin Luther King, Jr. and the publication of his book Black in White America in 1968. Several photos selected by the Smithsonian Institution from this series are now on exhibit at the Brill Gallery in the Eclipse Mill in North Adams.