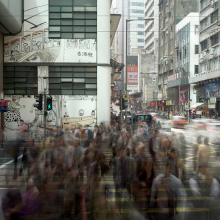 Laurent Baillet was Born in 1978. He is graduated from Sciences Po Paris.
He practiced various forms of art since his childhood. And began his career in the corporate world before devoting himself to photography in 2010.

He first alternates personal work and commercial studio photography.
Since 2012, he focuses on his artistic approach, realizing a personal work
and working for other artists.

Interested in painting and photography of the twentieth century, medium specific questions matter to him. But issues such as the society and the
place of individuals or religion and consumption are central in his work. The Warhol’s work interests him.
Laurent does photography to use the reality as a basis of his approach.
He is published and interviewed in printed press and on the internet from
2011, (around ten times).
He has participated to three group exhibitions in Paris area in 2013 and
2014.
Collectors from Europe and Japan bought his photographs.