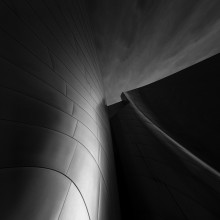 contemporary architecture - architectural abstracts - design
Biography
About Me
Adrenalized by photography, the possibilities, the art, the instant gratification, the communication process. Self-taught.

What inspires me?
Life itself – keep your eyes open, there is a lot out there. Every hour of the day offers a different light quality, texture, color…even smells can be made visible.

Julian Escardo is an american photographer who specializes in architectural photography and architectural abstracts. A graduate of the National Conservatory of Drama, Buenos Aires, Argentina in the early 80's, he was drawn to the practical and creative potential of photography. After moving to Toronto in 1985 he began working on his first series "Winter Scenes" taking on the Canadian late season as his inspiration shooting black and white film. In 1990 he moved to Los Angeles where he embraced a passion for the world of contemporary architecture that has led the way ever since. Today, his vision includes a new base in Paris, France.

His works hang in Belize, Germany, Argentina, Italy and the US and are owned by private collectors, form part of a permanent exhibition (Catanzaro, Italy, one of 64 photographers chosen from around the world), have been featured in print/magazines as well as chosen by an AIA (American Institute of Architects) video to promote Frank Gehry's Disney Concert Hall (Los Angeles, 2009) - They also served to inspire a "Pret-a-porter" collection launch in the city of Paris, France (April 2009 by designer Akifumi Nohara)

Note: Thank you for respecting my copyright and gaining my express permission for using any of my images.