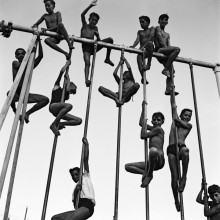 José Medeiros was born in 1921 in Teresina (Nordeste). His father taught him photograph techniques when he was only 12. At the age of 18, he moved to Rio to study architecture but followed his passion and began working with reviews, taking photos of celebrities. After the war, the French photographer Jean Manzon invited him to join the new review O Cruzeiro. It is the beginning of a new adventure full of liberty and boldness, in his own words. O Cruzeiro helped Brazil to understand its diversity, even if it also served the interests of Getulio Vargas, his authoritarian regime and the construction of national identity.