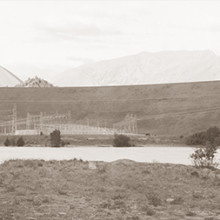 Jonathan Bourla is a fine art photographer, living and working in Snells Beach, Auckland, New Zealand. Born in London in 1966, he studied Engineering Science at Oxford University, and worked for three years in that field. During this time, significant life experiences led Jonathan to question his life, and one major consequence of this was the decision to emigrate to New Zealand. During Jonathan’s teenage years he had enjoyed photography, and now in New Zealand, deeply influenced by a beautifully printed book of landscape photographs by Ansel Adams given to him by his wife, Jonathan decided to whole heartedly pursue fine art photography. Adams had written some guide books explaining his techniques and processes, and Jonathan used these to embark on his own journey. Later Jonathan travelled to America to attend a workshop given by another American photographer, Howard Bond. Jonathan was overwhelmed by Bond’s photography. Bond, realising that Jonathan had traveled a long way and couldn’t learn everything in a single workshop, provided a book’s worth of notes for Jonathan to take away with him. Jonathan is forever grateful to him.

Back in New Zealand, Jonathan was accepted as a member of the Auckland Society of Artists. Early on he printed on Silver Gelatin papers, moving later to print his film negatives digitally with pigment inks on cotton rag papers. Most of Jonathan’s photography has been done with a large format camera, and he has produced a range of different portfolio collections. A common factor is his rendition of textures and details, and his intention to portray the subjects as though brightly illuminated, with easily seen detail throughout. Much of his work can be summed up as “Transforming the Ordinary”. His preference has become warm-toned photographs.

Jonathan had his first exhibition in 2007, which led on to others in subsequent years.

In recent times, Jonathan has become a committee member of Photoforum NZ.