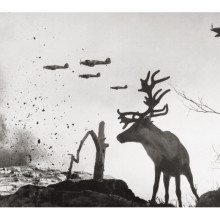 Yevgeny Anan'evich Khaldei (1917 - 1997) was a Red Army photographer, best known for his World War II photograph of a Soviet soldier Raising a flag over the Reichstag, in Berlin, capital of the vanquished Nazi Germany.

At the age of 12 he built his first camera. Since 1936 Chaldej worked as a photo reporter for the news agency TASS.

During World War II he accompanied – initially as a simple soldier, and later as a lieutenant – the troops of the Red Army.

Chaldej was a soldier and photographer to witness the “Great Patriotic War” – whether on the northern front in Murmansk or in the south of the Black Sea. Finally, he also documented the retreat of the Hitlers army and the advance of the Soviet army in Belgrade, Budapest, Vienna and Berlin. He worked also as a photojournalist at the Potsdam Conference (1945) and the Nuremberg Trials (1946) . After the war he worked intermittently until in the seventies for the TASS and the “Pravda”.