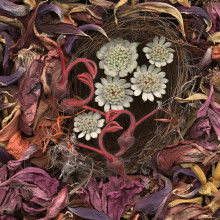 Janet Dwyer has worked as a professional photographer/instructor for forty years, primarily documenting works of art for artists, galleries and museums.

Her exploration into photo scanography began in 2001, initially because of the unparalleled resolution. Inspired by the infinite variety and exact structures found in nature - plants, feathers, bones, ice, even live insects find their way into her compositions, becoming part of a story or metaphor.

While nature unfolds, wilts, interacts and melts, a myopic lens and light source pass by, converting what it sees to digital information. Sometimes living insects move causing an colorful digital track to be imaged, an artifact of their trail and structure. That is the gift, the unpredictable part left to chance and timing, one of the unique effects of scanner imaging that fascinates Janet.

Dwyer's work has won several international awards including a first in the IPA and a second in the Master's Cup. Her scanography has been featured in several magazines - BW and Color, Amateur Photographer, Photo Techniques, Photo Life and Pro Nature Photographer. Currently her solo exhibition "Conversations with Nature" is touring public galleries in Western Canada.