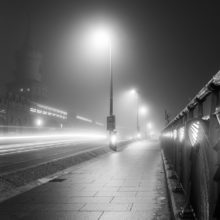 Jan K. Tyrel: Berlin born and raised. He has portrayed Berlin at night for many years. Tyrel motifs do not fit a classical genre. He sees the illuminated metropole as an erected space in mechanical motion. The single individual is rare in his photos and then only as forms. His photos remind us of night shots shown on postcards of the early twentieth century. Yet, his work is not nostalgic. This look also encompasses modern forms of architecture and its illumination.

Berlin Friedrichsbridge with Dome and Pergola