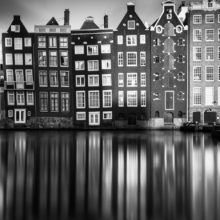 Ivo Kerssemakers was born in the Netherlands and raised in Amsterdam. He moved to the United States In 1997, where he lived in places such as Knoxville, TN, Schenectady, NY, Virginia Beach, VA before settling in Murrells Inlet, SC.

In 2015 Ivo started to pursue his passion for photography professionally and he has since won several awards for his work. His signature work consists of black and white, long-exposure photography, with an emphasis on clean, surrealistic, minimalist type image

Little Blue in Black and White