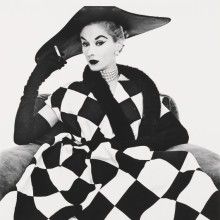 Irving Penn (June 16, 1917 – October 7, 2009) was an American photographer known for his fashion photography, portraits, and still lifes. His talent for picturing subjects with compositional clarity and economy earned him the widespread admiration of Vogue readers during his long association with that magazine, beginning in 1943. It also brought him recognition in the art world; his photographs have been exhibited in museums and galleries and are prized by collectors. His career at Vogue spanned a number of radical transformations in fashion and its depiction, but his style remained remarkably constant. Imbued with calm and decorum, his photographs often seemed intent on defying fashion. His models and portrait subjects were never seen leaping or running or turning themselves into blurs. Even the rough-and-ready members of the Hells Angels motorcycle club, photographed in San Francisco in 1967, were transformed into the graphic equivalent of a Greek frieze.