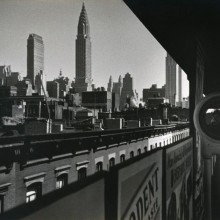 Ilse Bing (1899 - 1998) was a German avant-garde and commercial photographer who produced pioneering monochrome images during the inter-war era.

Ilse Bing was born into a comfortable Jewish family in Frankfurt-am-Main, Germany, in 1899. As a child, her education was rich in music and art and her intellectual development was encouraged. In 1920 she enrolled at the University of Frankfurt for a degree in mathematics and physics, but soon changed to study History of Art.

Bing bought a Voigtlander camera in 1928 and started to teach herself photography. The following year she bought a Leica, the new and revolutionary 35mm hand-held camera that had been commercially introduced just three years earlier and enabled photographers to capture fast-moving events.

In 1929, while still pursuing her studies, Bing started to gain photojournalism commissions for Das Illustriete Blatt, a monthly supplement of the illustrated magazine Frankfurter Illustriete. She continued to provide regular picture stories for the magazine until 1931.

At this time, Bing also started collaborating with the architect Mart Stam, a prominent modernist who taught at the Bauhaus school of design from 1928-9 and was appointed chief architect to 'Das Neue Frankfurt' (a major construction project) in 1929. Stam commissioned Bing to record all of his housing projects in Frankfurt. He also introduced her to Frankfurt's avant-garde artistic circles, in particular that of artist Ella Bergman-Michel and her husband Robert, great patrons of the arts who frequently hosted artists such as El Lissitzky, Kurt Schwitters, Jean Arp and Hannah Höch at their house.

With her artistic horizons expanding and finding some commercial success, Bing finally gave up her thesis in the summer of 1929 to concentrate on photography - a rather shocking decision for a woman of her background that astonished her family. The following year, greatly impressed by an exhibition of modern photography in Frankfurt, especially by the work of Paris-based Swiss photographer Florence Henri, Ilse Bing decided to move to Paris, the capital of the avant-garde and epicentre of developments in modern photography.

For the first couple of years in Paris, Bing still published her work regularly with German newspapers, continuing her association with Das Illustriete Blat. Gradually, she also started to publish work in the leading French illustrated newspapers such as L'Illustration, Le Monde Illustré and Regards, and from about 1932, increasingly worked for fashion magazines Paris Vogue, Adam and Marchal, and from 1933-4, American Harpers Bazaar.