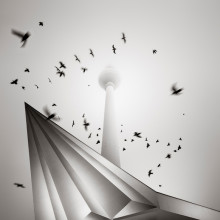 Ronny Behnert was born in Luckenwalde, a small city in the south of Berlin, Germany. Since 1989 he lives and works in Berlin but during this time he had his second home in Frankfurt am Main and on the island of Sylt too, where he spent two years.  He has been actively working on photography since January 2007. The award winning photographer founded in 2010 his project “Håggard Photography” and works for various newspapers and magazines but while continuously developing his skills and knowledge, Ronny never wants to give up his amateur spirit. To find himself back in his artworks he tries to spend as much time as it`s possible to explore the world. His recent series and photos from Iceland, United Arab Emirates, Denmark, Sweden and Venice have already been published in prestigious photo magazines.

The Queen l Frankfurt am Main 2013