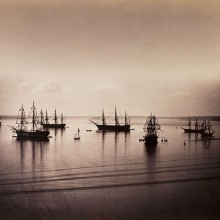 Gustave Le Gray (1820 - 1884) has been called "the most important French photographer of the nineteenth century" because of his technical innovations in the still new medium of photography, his role as the teacher of other noted photographers, and "the extraordinary imagination he brought to picture making".

Le Gray was born near Paris and trained there as a painter. Around 1847 he took up photography. Even before making the marine images, he became one of the most renowned pioneers of the new art. His architectural, landscape and portrait photographs, his writings, teaching and inventions were all highly influential.

However, in 1860, despite his success, he became bankrupt. Abruptly he abandoned his business and his family and left Paris for Italy. He finally settled in Egypt to become a drawing instructor, though he continued to take photographs, and died there in 1882.

The Great Wave, the most dramatic of his seascapes, combines Le Gray’s technical mastery with expressive grandeur. He took the view on the Mediterranean coast near Montpellier. At the horizon, the clouds are cut off where they meet the sea. This indicates the join between two separate negatives. The combination of two negatives allowed Le Gray to achieve tonal balance between sea and sky on the final print. It gives a more truthful sense of how the eye, rather than the camera, perceives nature.

When first shown, the luminous, shimmering effects amid Le Gray’s otherwise dark seascapes were often mistaken for moonlight. It is easy to see why this misconception arose in these monochrome images where darkness encroaches towards the edges of the scene. In fact, he achieved the moonlight effect by pointing the camera in the direction of the sun during daylight.