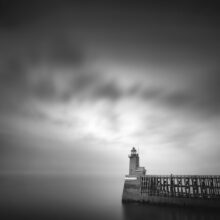 Gee Hurkmans (1952) is a self-taught photographer based in The Netherlands. His images could best be described as fine art minimalism. They are "of nowhere", self-referential, do not refer to anything, they are what they are, nothing else. His photography is an almost Taoist quest for stillness, for quietude and serenity.
His work is not aimed at representing reality, on the contrary. He tries to recreate the mood that he felt when shooting the photograph; it is the artist's creative impression.

He feels inspired by haiku. The link with haiku is an interesting one: visual haiku vs. poetic haiku. The haiku is a very short Japanese poem, minimalist, capturing and isolating a moment in time, with a focus on nature. Almost like an epiphany. If photography is painting with light, a haiku poem is painting with words. Both create their own unique reality.