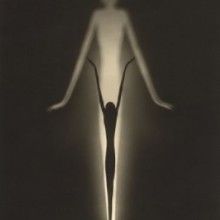 Frantisek Drtikol (1883 – 1961) was a Czech photographer especially known for his nudes and portraits. Dritikol was born in 1883 in a mining town in what was then the Austro-Hungarian Empire, he rose to become a prominent artist and famed portraiture photographer. Drtikol grew up with a desire to draw and paint. After a period of military service, he moved to Munich to study art. In Munich, Drtikol focused primarily on drawing and photography. Photography as an artistic medium, it must be remembered, was very new and seen as a perfect example of modernity. It combined science and art, technology and intuition. After finishing his education, Drtikol moved to Prague. He completed a brief period of apprenticeship with another photographer, then in 1910 opened his own studio. He quickly developed a reputation as a portrait photographer. His clientele included many of the most notable public figures of the day, ranging from captains of industry to political figures to famous artists and musicians. His subjects included Tomáš Masaryk, the first elected president of Czechoslovakia, and the composer Leos Janacek, and just about every artist living in or near Prague. Within a decade, his studio was famous throughout Europe. Portraiture was the means by which he supported his studio and made a comfortable living, but Drtikol made his name as an artist through his nude studies. His portraiture was elegant and refined, but his nude studies were daring and inventive. They were the epitome of avant garde. He was among the first—if not the first—photographer to incorporate the elements of Art Deco into his work. He was an influential figure in an era known for its creative vigor. He created vivid images unlike anything anybody had ever seen. And yet when he died 78 years later, he was impoverished and virtually unknown.