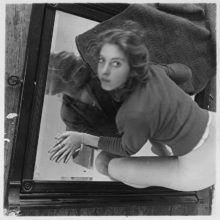 Francesca Woodman (1958-1981) grew up in a family of artists and began taking photographs in her teens. From 1975 to 1978 she studied at the Rhode Island School of Design. Her oeuvre is usually divided into periods: the early work, her work as a student in Providence, work made in Italy (1977-1978) or at the MacDowell Colony and, finally, the work she produced from 1979 in New York until her death in 1981. She left several hundred gelatine silver prints, although she also experimented with other techniques.