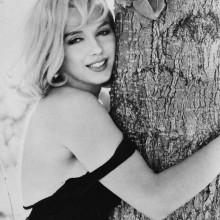 She began photographing in 1946, while working at a photo-finishing plant in New York City, and then studied photography in 1948 with Alexei Brodovitch at the New School for Social Research in New York.

Arnold first became associated with Magnum Photos in 1951, and became a full member in 1957. She was based in the US during the 1950s but went to England in 1962 to put her son through school; except for a six-year interval when she worked in the US and China, she lived in the UK for the rest of her life.

Her time in China led to her first major solo exhibition at the Brooklyn Museum in 1980, where she showed the resulting images. In the same year, she received the National Book Award for In China and the Lifetime Achievement Award from the American Society of Magazine Photographers.

In later years she received many other honours and awards. In 1995 she was made fellow of the Royal Photographic Society and elected Master Photographer - the world's most prestigious photographic honour - by New York's International Center of Photography. In 1996 she received the Kraszna-Krausz Book Award for In Retrospect, and the following year she was granted honorary degrees by the University of St Andrews, Staffordshire University, and the American International University in London; she was also appointed to the advisory committee of the National Museum of Photography, Film & Television in Bradford, UK. She has had twelve books published.