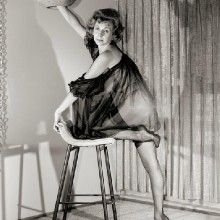 Elmer Batters (November 24, 1919 – June 25, 1997) was a pioneer fetish photographer who specialized in capturing artful images of women with an emphasis on stockings, legs, and feet: ahead of his time in popularizing foot fetishism imagery as erotic entertainment. Batters started out publishing his photographs himself, and since the early 1960s his work was featured in magazines such as Leg-O-Rama, Nylon Doubletake, and Tip Top, to name but a few. He paved the way for such critically acclaimed modern foot-fetish photographers as Ed Fox and Johnny Jaan. One of Batters' favorite fetish models was a Rubenesque woman named Caruschka. Little is known about the model's life, but Batters was smitten with her as were his fans. Several photo shoots featured the chubby, attractive Caruschka on a garden swing displaying her petite feet in classic foot-fetish "Andalusian-fan" poses as well as exhibiting a set of fine high arches and well-formed calves. Taschen has published several books featuring the work of Elmer Batters.