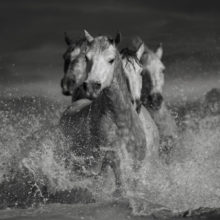 Ejaz Khan was born of a film director in Bombay. He spent his formative years on Bollywood sets where his love of photography manifested. There he learned the power of storytelling, dramatic narrative and gained his appreciation for the cinematic aspects of production. These indelible values stayed with him in his teenage years as his interests blossomed further into the realms of fashion photography. Seeking adventure, Ejaz left India for New York to combine his passions and become an established fashion photographer. His work has since been published in magazines such as Vogue, Twill, Noise and numerous others. Likewise he has worked as a designer and photographer for his contemporary women's clothing brand, Tangerine NYC sold nationwide. Since 2013, Ejaz has expanded his photographic repertoire to the natural world with EJAZ KHAN EARTH. Borrowing from the narrative techniques of his fashion stories, he transposes them onto his animal subjects. With his keen eye for dynamism he breaks apart the seemingly untamable patterns of the animal world to capture those striking moments that encapsulate the personality, energy and magic of their behavior. EJAZ KHAN EARTH has taken him and his imagery all over the globe.