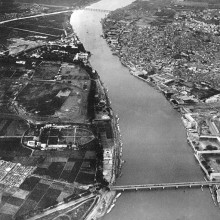 Eduard Spelterini (1852 - 1931) was a Swiss pioneer of ballooning and of aerial photography.

Spelterini was very talented musically and had such a beautiful voice that he enrolled at the Paris Conservatorium for three years of singing tuition, where he was one of the top students. Then he fell ill with Tuberculosis and the young man was forced into convalescence in the south of France. Whilst in Marseilles he saw his first balloon. A passenger became nervous because of the apparently less than ideal weather conditions and refused his place, offering the young man an unexpected opportunity for his first balloon flight.

Spelterini was so impressed by the flight that he left his studies at the Conservatorium and hurried to enrol at the Paris Aviation Academy, the 'Académie des aérostatiers'. In 1877 he qualified as an Aeronaut. He then went on to acquire many years of experience in the air. In 1887 he commissioned construction of his own balloon and began to take passengers regularly with him on his flights. He travelled widely throughout Europe and made ascents from places such as the Vienna Prater and London’s Hyde Park. There was usually a well-filled picnic basket and a bottle of Champagne also on board!

Military academies and war schools compelled him to manage instruction courses in aviation. Over the next few years the captain of aeronautics made 570 flights and carried a total of 1237 passengers. These included amongst others Teachers, Artists, Councillors, Generals, Dukes and Duchesses, captains of Industry and Publishers.

In 1893 he began taking pictures from his balloon basket and thus became a pioneer of alpine aerial photography. His photographs from the balloon allowed people an impression of the world from a birds-eye view for the first time. He held many magic lantern presentations and became very popular as a result. His “Over the Clouds” collection caused a sensation wherever it was seen. He made over 600 such presentations in four different languages.

Together with his presentations he also became famous above all else for his pioneering flights across the central Alps in a gas balloon. He was the first to undertake this risky adventure with a balloon. His flights also had a scientific purpose: Physicians, Biologists, Doctors of Medicine and Geographers also had great interest in the opportunities for research presented by this new method of transport. One of these was Ferdinand Graf von Zeppelin, who first came up with the idea of a steerable airship. Spelterini made his last balloon flight in 1926.