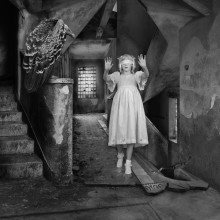 "To see the light we must first acknowledge that we are in the dark."

Dominic Rouse has been described as one of the most interesting photographers working today.
He is a visionary in the truest sense of the word and his work probably has more in common with painting than photography.
Brooks Jensen, the editor of America's LensWork Magazine, has said that Rouse does not take pictures of the world, he makes photographs of his mind.
His unique vision and mastery of his craft set him apart from most of the other photographers who use the computer in their practice.
His work may appear to be rooted in the past but it is the product of a seamless blend of the latest digital technologies and the timeless qualities of large format photography.

Rouse was born in England in 1959.
His career began in photojournalism in 1977 and has progressed through various stages into the world of fine art.
His work has received a number of international prizes and been published globally.
He lives far from the madding crowd in a small wooden house on a remote Thai mountain with his wife, Wilaiwan and their daughter Angeline.

The cunning of unreason

What will survive of us is love

Twilight of the idols