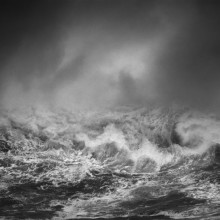 Born in Beijing in 1955, DoDo Jin Ming was for many years a professional concert violinist after training at the Royal Academy of Music then the Hong Kong Academy for Performing arts. Ming had never been to an art exhibition until 1992 when she visited a Joseph Beuys show. She was so overcome by her first exhibition that she gave up the violin and became a self-taught photographer.

Ming has exhibited widely in Europe, the US and the Far East including the National Museum of Beijing, and the Hong Kong Museum of Art. Her work is held in collections at the Art Institute of Chicago, the Museum of Fine Arts Houston, the Los Angeles County Museum of Arts and the Microsoft Art Collection amongst others.
Free Element / Behind My Eyes was Ming's first UK exhibition, held on the first and second floors at Michael Hoppen Gallery from June through August 2005. This exhibition was a synthesis of two series of work; ‘Free Element’ - turbulent black and white seascapes, and ‘Behind My Eyes’ haunting images of fields of dying sunflowers. The similarity between these disparate series of work is that they both give visual expression to the inner life of the soul.