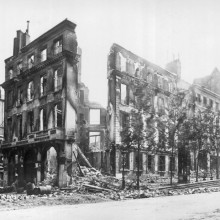 Bruno Braquehais (1823 - 1875) was a French photographer active primarily in Paris in the mid-19th century.

Braquehais's early photographs consist primarily of portraits and female nudes, many of which were colored by his wife, Laure. Art critics have pointed out that many of Braquehais's photographs of female nudes are cluttered with distracting objects (e.g., the Venus de Milo), giving the model the appearance of being isolated. Notable portraits by Braquehais include composer Ludwig Minkus and choreographer Arthur Saint-Léon.

Braquehais's 109 photographs of the Paris Commune document the Commune at its height and after its fall. His photographs documenting the toppling of the Vendôme Column include scenes of the Column before its fall, a scene showing workers with ropes tied to the column ready to pull it down, and a photograph of Communards posing next to the toppled statue of Napoleon that had graced the top of the column. Braquehais also took numerous photographs of the various barricades the Communards had erected in anticipation of an invasion of republican forces, troops gathered at Tuileries Palace and Porte Maillot, and the ruins of the Maison Thiers.