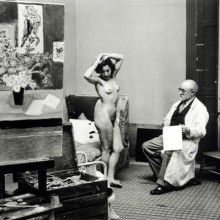 Brassai (pseudonym of Gyula Halasz) (9 September 1899 — 8 July 1984) was a Hungarian photographer, sculptor, and filmmaker who rose to international fame in France in the 20th century. He was one of the numerous Hungarian artists who flourished in Paris beginning between the World Wars. In the early 21st century, the discovery of more than 200 letters and hundreds of drawings and other items from the period 1940–1984 has provided scholars with material for understanding his later life and career. He was trained as a painter in Budapest, and then in Berlin. He moved to Paris in 1924 and supported himself as a journalist, writing for publications throughout Europe and the United States (it was in Paris that he changed his name to Brassaï, meaning "from Brassó"). He only turned to photography to document his articles but eventually he became enchanted with the medium. At night he would venture out to capture the city's deserted streets, its shadowed monuments, and those who only emerged after dark – prostitutes, street cleaners, and rag pickers - many of whom he captured in candid photographs. From 1943-45, when working as a photographer was difficult due to the German occupation, Picasso encouraged him to return to drawing, and later sculpture. He was also an accomplished writer and painter. But Brassai's career as a photographer resumed after the war and continued through the late 1960s; it includes work for periodicals including Harper's Bazaar, Picture Post, and Surrealist magazines such as Verve and Minotaur. He is buried in Montparnasse Cemetery in Paris.