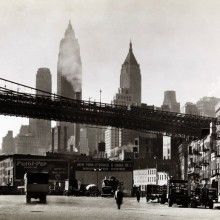 Berenice Abbott (July 17, 1898 – December 9, 1991), was an American photographer best known for her black-and-white photography of New York City architecture and urban design of the 1930s. Abbott studied for one year at Ohio State University, Columbus, before moving to New York in 1918 to study sculpture. While in New York, Abbott met Marcel Duchamp and Man Ray, two of the founders of the Dada movement, an artistic intellectual movement that emerged as a protest to the senseless suffering of World War I. Moving on to Europe in the 1920s, Abbott worked from 1925 to 1929 as a photographic assistant to May Ray in Paris. Through her work printing Man Ray’s photographs, Abbott herself discovered her talent as a photographer. In 1926 Abbott had her first solo exhibition in the Parisian gallery, Le Sacre du Printemps. This exhibition featured Abbott’s portrait photography in which she captured personalities associated with avant-garde art movements. During this time, Abbott also became interested in the work of Eugène Atget, a leading French photographer who was celebrated for his photographs of the streets of Paris. Upon Abbott’s return to New York in 1929, she moved away from portrait photography to documentary photography akin to Atget’s images, using the city as her subject. During the 1930s she embarked on a project to capture the transformation of New York into a modern urban center. Abbott was particularly interested in the physical changes that the city had undergone, its changing neighborhoods with huge skyscrapers replacing older low-rise buildings. She began a series of documentary photographs of the city as part of a Federal Works Project Administration initiative carried out from 1935 to 1939. At the end of the project, she published her photographs as a book