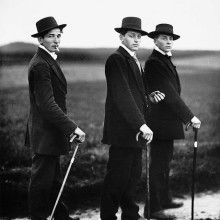 August Sander (17 November 1876 – 20 April 1964) was a German portrait and documentary photographer. August Sander set for himself a problem that ranks among the most ambitious in the history of photography: He assigned himself the project of making a photographic portrait of the German people. He set about his task as systematically as a taxonomist, gathering, specimen by specimen, exemplary players of the roles that defined German society. Hod carrier, gamekeeper, confectioner, student, functionary, industrialist --- piece by piece Sander collected the elements for his composite portrait. His concept is almost a caricature of teutonic methodology, and if it had been executed by a lesser artist the result might well have been another dreary typological catalogue. Sander, however, was a very great photographer. His sensitivity to his individual subjects --- to expression, gesture, posture, costume, symbol, habitat --- seems unerringly precise. His pictures show us two truths simultaneously and in delicate tension: the social abstraction of occupation and the individual soul who serves it. Sander was a professional portrait photographer, but many of the subjects for his great project surely did not pay him. Some doubtless could not, and others, if paying customers, would have expected to be shown less fully revealed. In his professional role he must have made safe and routine portraits, but there are none among the two hundred or more of his published works. Sander's Face of our Time was published in 1929. It contains a selection of 60 portraits from his series People of the 20th Century, and is introduced by an essay by Alfred Döblin titled "On Faces, Pictures, and their Truth." Under the Nazi regime, his work and personal life were greatly constrained. His son Erich, who was a member of the left wing Socialist Workers' Party (SAP), was arrested in 1934 and sentenced to 10 years in prison, where he died in 1944, shortly before the end of his sentence. Sander's book Face of our Time was seized in 1936 and the photographic plates destroyed. Around 1942, during World War II, he left Cologne and moved to a rural area, allowing him to save most of his negatives. His studio was destroyed in a 1944 bombing raid.