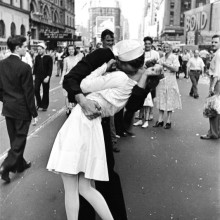 Alfred Eisenstaedt (1898 - 1995) was a German-born American photographer and photojournalist.

Alfred Eisenstaedt was given his first camera at the age of 14 and sold his first photograph in 1927 to the newspaper Der Weltspiegel at a time when photojournalism was at its very infancy. Narrowly escaping the Holocaust in Europe Eisenstaedt emmigrated to the United States.
He was soon hired along with three other photographers, Margaret Bourke-White, Thomas McAvoy and Peter Stackpole by Time founder Henry Luce, for a secret start-up known only as “Project X.” After six months of testing the mystery venture, it premiered as LIFE magazine on November 23, 1936.

Over his career Eisenstaedt photographed a diverse range of subjects ranging from the first meeting between Hitler and Mussolini, the aftermath of the Hiroshima bomb, and post depression America, to portraits of John F Kennedy, Albert Einstein, and Marilyn Monroe, to enduring photographs of ordinary people across America and Europe.
As diverse and disparate as Eisenstaedt’s photographs are, all of these images are unified by Eisenstaedt’s continually fresh eye and talent for capturing pivotal moments in the human experience.

Up until his death in 1995, Eisenstaedt was still shooting and adding to his inventory of over 100,000 negatives in his personal office at LIFE magazine.