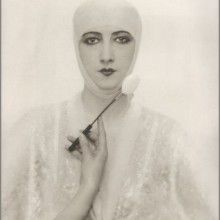 Adolph de Meyer (1st September 1868[1] - 6 January 1946) was a photographer famed for his elegant photographic portraits in the early 20th century. He was also the first official fashion photographer for the American magazine Vogue, appointed to that position in 1913. Although de Meyer habitually fictionalized his biographical information, it is fairly certain that he was educated in Germany, that he began his photographic interests early in life, and that he was initially influenced by German symbolist artists such as Gustav Klimt. He spent a great deal of time in London, where he belonged to a group of photographers called the Linked Ring Brotherhood, which promoted the idea that photography was a fine art and not merely a craft. During World War I, de Meyer moved to New York City and became a specialist in society portraits. In 1913, he received a contract from Condé Nast to be the exclusive photographer for Vogue and Vanity Fair. When de Meyer began working at Vogue, there was not yet a genre called “fashion photography”—for the most part, models and clothes had been represented through drawings. De Meyer was instrumental in ushering in the new style, and his fashion photographs became known for their bold use of fabrics, soft focus, and for the somewhat lifeless, statue-like quality in which he rendered his models.