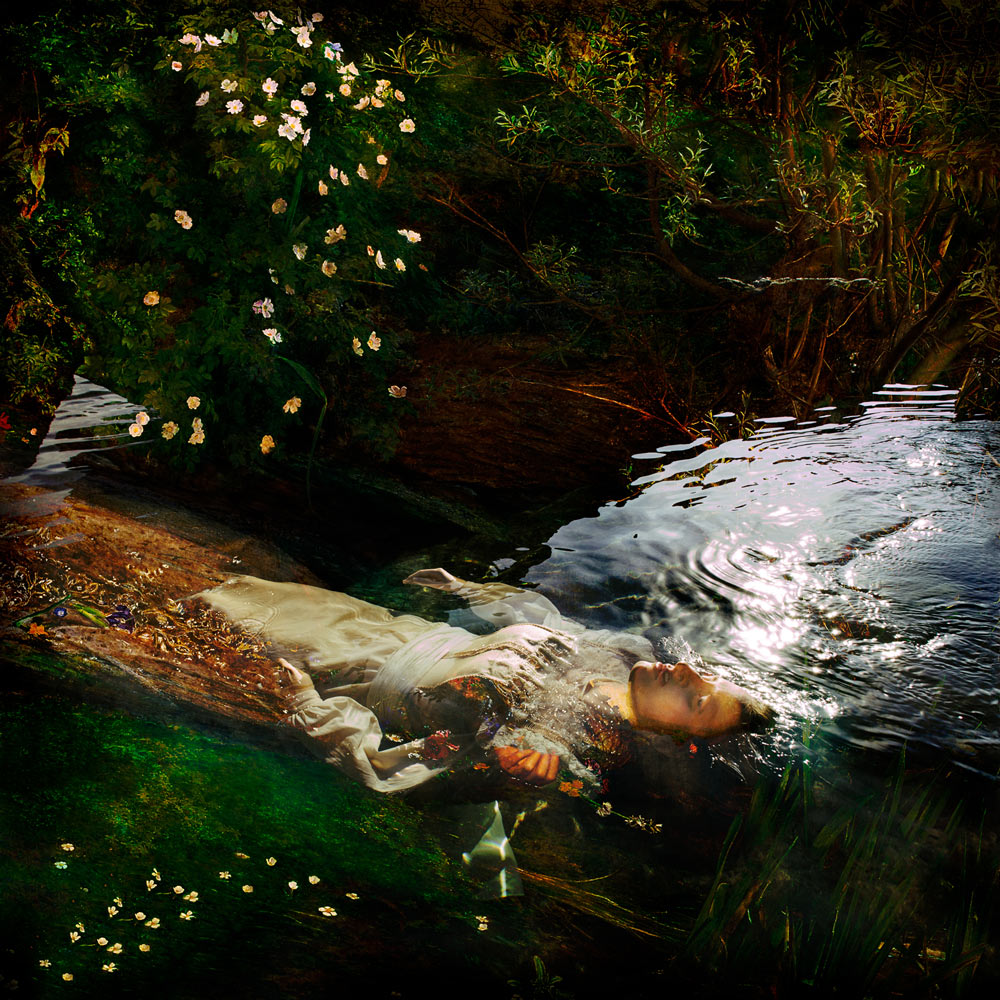 My name is Beatriz Glez Sa, I’m an interdisciplinary artist, that in the late years, works mainly in the photographic realm.

I saw a documentary on Lennart Nilsson, a Swiss scientific and documentary photographer, at the time I was studying Fine Arts centred in painting. His documentary work “The hunting of the polar bear in Spitzbergen” (1947), A picture in which a baby bear stands on the body of his mother beaten to death and looking a hunter who wields a stick against her. That photo really moved me. It was published by Times magazine and caused public opinion to rise up in protest for the prohibition of this cruel practice.
This caused me a great effect emotionally and cognitively made me reflect on the relevance of the photographic medium and its extraordinary ease of diffusion in our current times. I thought that photography could promote change, rise of consciences as well as cross borders and get easily understood for people with education and non prior education (not just Art experts and highly educated people), and different backgrounds, so I decided to change my pathway and opt for the speciality of “image” (photography, video, and film) as a curricular priority. 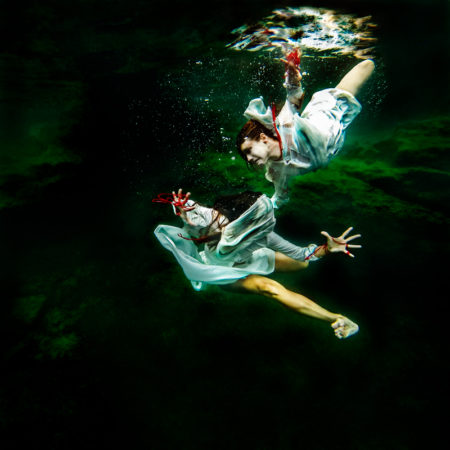 – Do you have an artistic/photographic background?

I started to study art when I was a teen, in a high school, a special Bachiller centred in art and afterwards studied BFA and MFA in Barcelona University, Design, and Photography in Nottingham Trent University in the UK. I also got a Master as an Art teacher.

– Which artist/photographer inspired your art?

The major influence are a combination from artists the painting and photographic field overall, and it’s quite eclectic.
The triad of Art – Concept – Aesthetics is the main drive in all my artworks.
In photography lately, I’m influenced by Renaissance and Baroque (especially Spanish Baroque which is more in touch with the mortality and a tragic sense of life, which is coherent conceptually with the themes that I like to tackle contemplating illness, resilience, health or ecology (although with a much hopeful tone). I cannot mention all the inspiring artists from the Spanish Baroque or other painters that had influenced me deeply, but I must mention a few like; Goya, Miró, Lucian Freud, Rothko for name just a few amazing painters that have shifted my way to see, think and feel.
In the photographic realm, I’m mainly drawn towards authors led by concepts or philosophies, in the first years of my career, as a student, I was quite impressed by, Lennart Nilsson as I mentioned before, Cindy Sherman, Nan Goldin, Martin Paar, Duane Michals, Andres Serrano or the photo-paintings of Gerhard Richter. I would say that the conceptual artwork of Jenny Holzer, Ana Mendieta, and Marina Abramović had a deep impact on me and inspired some of my earlier projects.

I nowadays must mention especially Henri Cartier-Bresson, Philippe Halsman or Chema Madoz in Surrealism, Horst P. Horst in Fashion, or the conceptuality of Joan Fontcuberta and many others that are quite inspiring to me. Although out of the artistic realm, I must say that neuroscientifics, psychologists and philosophers, and lately, authors in neuroaesthetics, are inspiring my projects on a daily bases. 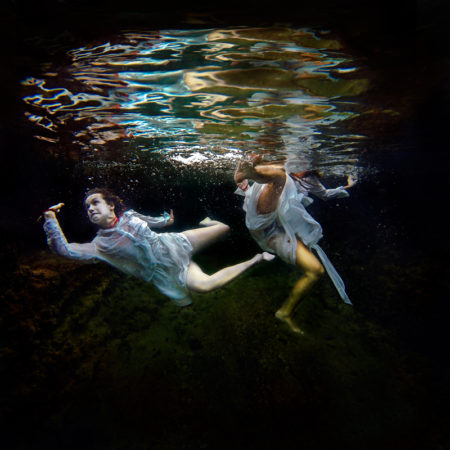 – How much preparation do you put into taking a photograph?

The most complicated thing for me is the conceptual base, it requires lots of research, usually for several months before to start with the creative and artistic direction, shooting and editing. I work in several projects at the same time. All of them are connected so I get the ideas to develop almost simultaneously, so that way I always have one or more projects to shoot and edit. I usually write a previous literary essay to organise all the ideas and make it work, and afterwards, I work on the images, and all the rest aspects of the production included the creative team that I need for each project.
Because my shootings require a lot of work and big physical effort for me and for all the team, I do my best to combine several ideas/projects for shooting to be more effective. 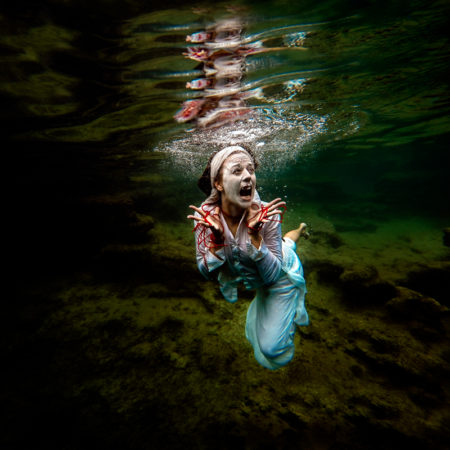 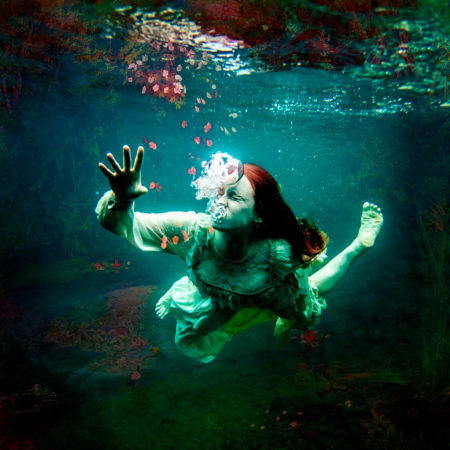 – Could you please tell us something about your technique and creating process?

I started to experiment with the traditional process of developing film and paper in black and white, although I was born in the digital era, at the time, It seemed to me that it could give me many creative possibilities. I was very keen on the cross-process technique with film, that makes possible to get an approximation to the painterly aesthetics with vibrant, saturated impactful colours, so close to fauvist and expressionist painting with which l resonated with at the beginning of my career.
Nowadays I mainly work in digital, with some exceptions, and I edit mainly in Photoshop, which gives me a lot of artistic-creative possibilities.
I like working with all kind of cameras that can give me a pictorial finish. For underwater photography nowadays, I work with a full frame Sony camera, but I’m open to combining it with other cameras, (Olympus, Nikon, etc) if the idea-project requires it.
I work with sharp images but often I low the sharpness in post-edition to get a more pictorial sensation in some of the parts or in the whole picture if that makes sense to me.
I take pictures from a “photographic perspective” ( I take in consideration how to get what I want in the shooting not afterwards) but I treat the picture in the editing process as if it were a painting of light (Which basically is Photo-Graphy). I usually don’t “paint” or add objects that weren’t in the original picture, but I might increase or decrease the shadows or colours, changing sometimes the depth and shapes or combining different pictures. The process can be different for each project, everything depends on the concept/concepts.

For underwater photography, I like to work in a natural environment, mostly in the Mediterranean sea, with natural conditions and light. I like the synchrony with my team, nature and the elements in this creative process, a sense of lack of control but with an openness and attentive presence that activates, and in some cases, change the preconceived ideas to different outcomes, as if any creative endeavour relied on the synchronic flow and the allowance by nature to all of us to create.

In printing, I love the Lustre, Satin and overall, the Matte Fine Arts archival papers for my limited edition prints. They give them a real feeling of high quality museum Baroque – Classical painting. I mostly work with Hahnemühle for the optimal results, because it’s a Museum-quality paper as well as is certified for more than 100 years, which in combination with archival inks gives me a high end/quality finish that I’m looking for in my pictures. 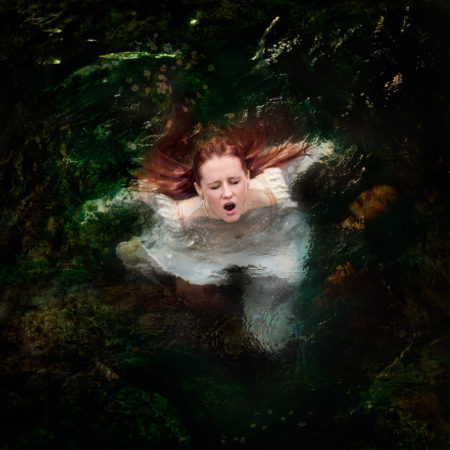 – What do you do in your life besides photography?

Art-Photography is my main job although I’m exploring other creative possibilities at the moment.

What future plans do you have? What projects would you like to accomplish?
At the moment I’m working in the second part of a project about ecology (Human Waste II), and at the same time I’m deepening in my research on the healing of trauma and I have several projects in mind, I will start the shooting of some of them this month.
Also, after the generous opportunity that the National Museum of Photography of Colombia gave me by inviting me to their biennial and offered me the chance to give a conference on the conceptual bases of my work, with a good reception from the audience, I would like to write a book in English and Spanish to get deeper in all the concepts and purposes of my work. Hopefully, I will find the time to do it all! 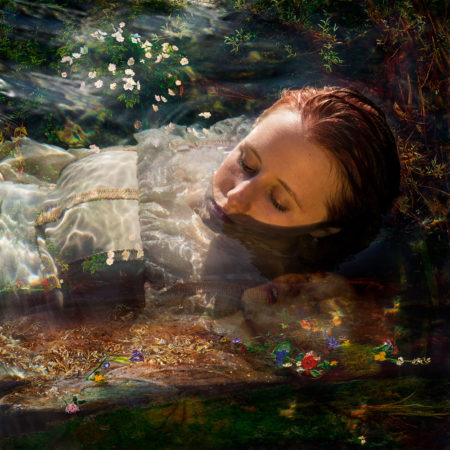